Our much loved, but terribly ineffective Border Collie, Noni, was dying from cancer. We knew she wasn't going to last through the summer. It was especially hard, despite her being cross-eyed and unable to do a decent job of gathering sheep. We'd just lost our only other not-so-well-bred Border Collie, Bee, whom we loved equally as much some months prior to Noni becoming ill. Unfortunately, Bee has never expressed any interest whatsoever in sheep or sheep gathering. Nonetheless, we had Sam, our Golden Lab, but he was facing his 11th birthday, and the only sheep gathering thing he knew was retrieving sticks thrown in a direction that would create mass confusion and stampede- like behavior on the pad of the sheep, which actually helped in some situations to get sheep moving.

I'd wanted a REAL Border Collie for years, but three dogs was all I'd really ever needed here in the mountains of West Virginia on cold, chilly, winter nights (i.e., "3-dog nights") It was hard convincing myself or my husband otherwise. So, I waited. Noni was failing. It would soon be time to look for a puppy to fill the void, and this time, hopefully, I'd end up with a puppy that would grow up loving sheep, and wanting nothing more than to gather them for me from hither and yon. I'd been thinking puppy when ''Wool-in-the-Wind'' showed up.

Mind you, "Wool-in-the-Wind" does NOT, however, fit the description of a puppy. In fact, "Wool-in-the-Wind'' fits the description of a critter we'd all most likely avoid no matter what the circumstances. Black and white, yes—like most Border Collies; cute, sometimes playful, yes—like most Border Collies; the smell, however, which we most associated with this black and white critter, is one to run from. A friend and I had been dyeing wool on an outdoor stove near our garden one lovely, but very windy, spring afternoon and noticed near our garden fence what she thought to be "Wool-in-the-Wind.'' As we approached, I yelled out, "Oh no, not Wool, but Skunk-in-the-Wind!!!'' This little skunk, whose back leg was injured but seemed otherwise healthy and quite intelligent I might add, had been visiting us all spring to take what remnants he could gather from our compost heap. And on those March/April nights we slept in our barn loft during lambing, he had made himself a home underneath our porch! We thought he might leave once we moved back to the house, but he seemed to like not only what we had to offer, but was willing to share to the extent that he never sprayed anything or anyone nearby. Still, "Wool-in-the-Wind'' had an unpleasant odor, and despite my tolerance of all critters, wasn't the most welcomed of visitors. His little black nose and the white tuft of fur that stood "straight up'' right between his eyes stayed with me, long after our repeated attempts to discourage his living under our house and porch had driven him, at least, to take refuge under one of the old barns up-the-hollow from the house. 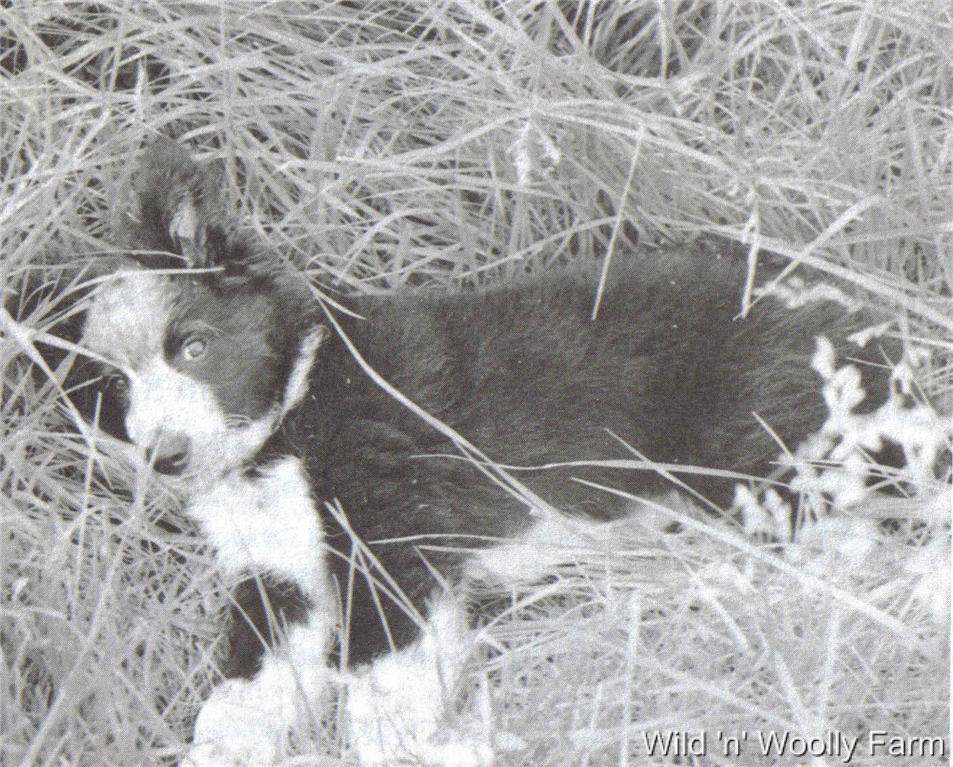 It wasn't long after "Wool-in-the-Wind'' "moved'' that I dreamed of a puppy that wanted to come to live here at the farm. Seems we never get to pick our animals. They always pick us first! This puppy was the biggest bully and the fattest of his litter mates and he looked just like "Wool-in-the-Wind.'' The Maryland Sheep and Wool Festival was the following weekend and there had always been puppies of the Border Collie variety there for the picking, but I dared not say anything to my husband, Bev. Noni was still with us, and we both agreed "NO MORE DOGS 'TIL NONI WAS GONE." Every day I would see this little puppy in my daydreams and in my nightdreams. Still, I just kept quiet, but all the time, thought to myself, “Oh no, I'm not really ready for a PUPPY . . . and the PUPPY do's and PUPPY don'ts . . . HELP!'' But, still, I said nothing.

We drove down the following Friday afternoon to West Friendship, Maryland, to set up our Wild 'n' Woolly booth for the Maryland Sheep and Wool Festival. Still, not one word about PUPPY from me; my husband helped unload the truck and then took off to park in our usual camping spot in the back little field next to the stream where almost no one ever marks. In 30 minutes or so, he returned to tell me we had neighbors this year; a camper parked just 30 yards away. A camper whose owners had apparently brought their three Border Collies and what he thought might be a litter of pups because he'd heard them when he'd gotten out of the truck—hadn’t actually seen them, but . . .

And yes, the rest is history! The pups were there for the picking, the fattest was the bully of the litter, and he looked just like ''Wool-in-the-Wind.'' His eyes said, "Please take me home." We both said yes and later that night I told Bev about my dream. We'd have called him "Wool . . . ,'' but that's a bit much when you're working sheep and wanting an exuberant, most intelligent, not cross-eyed, wanting-more-than-anything-else-in-the-world-to-chase-sheep less than novice Border Collie pup to listen. So, we named him "Mr. Kohl," or "Kohl'' for short, after Mr. Kohl, our farm sitter and godparent back at the farm that weekend.

Well, Kohl is everything I'd asked for in a Border Collie and more—herds any and everything that moves, and some things that don't. Is intelligent enough to know the difference and still bull-headed enough not to care. Loves attention, but chooses to eat alone and in the peace and quiet of his domain with no one looking over his shoulder or attempting to share his meal. And with a grin that would shake Godzilla himself, looks the pad of the most handsome, Gargoyle-style SHEEP DOG! He obviously has my number and will require schooling this year to learn techniques that I either don't know or haven't learned myself from having had less-than-working Border Collies in the past.

Noni passed on in the latter part of the summer . . . she had ignored Kohl to our surprise. Sam, on the other hand, would have gladly made a meal of the Border Collie had he had the chance initially to nail Kohl firsthand. Once for no other reason than the sheer fact that Kohl was barking (I was feeding hay to the horse and he wanted desperately to be with, not near me). Sam attacked him from afar and, had I not intervened, may have had an afternoon doggie treat for certain. That taught Kohl some respect and, needless to say, he's less inclined to bark when Sam's around, let alone, do anything other than "grin and bear'' his teeth and belly in submission.

I'd really like to have been home or had a video camera on the day both Bev and I were away the last of September during the Virginia State Fair. Sam was in the house, but had access to

the porch and yard through the front door which we left open for him. Kohl was tied outside—otherwise, he'd have eventually decided to chase or gather sheep to his satisfaction! Sometime during the day, Kohl came out of his collar and decided to join his big brother, Sam, on the porch—the door's open, remember?! Bev got home earlier than I did that day to find both dogs peaceably lying on the porch. Sam and Kohl had apparently come to an agreement as far as they were concerned about appropriate behaviors and were tolerating each other nicely. The surprise came when Bev entered the house and found. First, my Lambchop's puppet, which we call "Chopper,'' lying in a basket which had held only a few papers and some of those "pipe cleaner sheep'' we sheep people make and sell at fairs and festivals. It seemed odd—my things are usually in order even if the floors in our house remind you of pioneer days—that the Little Red Wagon which Chopper and all other 20 or so various stuffed sheep, bears, dogs, and pigs occupy was empty! Bev rechecked the basket in which Chopper laid and found only a few pipe cleaner sheep, fewer yet, in fact, although Chopper was not chewed or torn apart. An investigation soon led to the discovery that Kohl had been investigating things earlier himself and had rounded up all the stuffed sheep, bears, dogs, and pigs to include a few pipe cleaner sheep or their various parts, and herded them to the bed we kept on our front porch during the summer. Nothing was too badly damaged, although "Tallulah Baahead'' needed cosmetic surgery on her right eye, and ''Angela Lamb'' an intestinal hernia repaired. Apparently, Kohl had gotten a whiff of the real thing—wool wrapped around pipe cleaners—when he walked past the basket on the bench and dropped Chopper in the basket to retrieve and gather the pipe cleaner sheep to the porch. Chopper was forgotten! When I returned later that night and heard about this, all I could think about was what went through Sam's mind as he watched Kohl in the act of herding the "Inside Flock'' to the porch. Sam has always been the model dog, never chewed anything, ran away only when no one paid him the attention he thought he deserved, and NEVER touched even ONE of my toys or inside critters (stuffed sheep, bears, dogs, or pigs), NEVER! (He had his own stuffed toys and he knew the difference. I suspect Kohl may never know that difference, however.)

So, today, I chuckle. Surely, that incident would have been great material for TV's "World's Funniest Videos.'' Surely, one day Kohl will grow up and gain both Sam's respect and ours, as well, as we watch him retrieve sheep from the back 240. Returning home with that same Gargoyle grin, that same tuft of white wool that stands "straight up'' right between his eyes, at a speed not wholly different from that of the speed of light, looking much like that ball of fur my friend and I mistook one windy afternoon last spring for 'Wool-in-the-Wind.''

Good Day All Critters! Join Us...

Check out our friend's YARN

Copyright ©2021 Wild 'n' Woolly Farm // This website is Spontaneously and Erratically Maintained by Woolly Elves every now & then!